As the plane was about to land, we felt a bit happy; a 12 hours flight in the economy class is not as easy as it sounds like. Within the plane we got to know our travel agent. So, immediately after check-out, we started our sight-seeing: 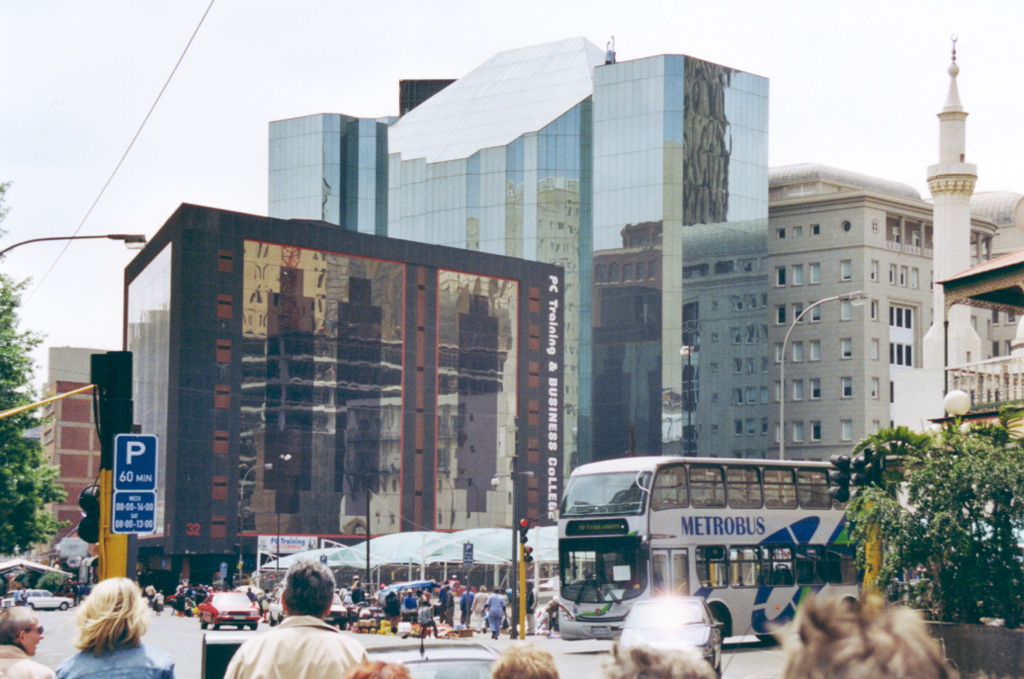 A sight-seeing tour in Johannesburg was the first point in our programme. Johannesburg - the city most famous about its gold and diamond mines. That's why, a stop at the DeBeers building was mandatory. That building looks like a giant diamond and I think, I know why. But the workers in the mines were not so happy in former times: They had to stay in very poor accomodations. That's why, SoWeTo was build step by step, the South Western Township. Today, SoWeTo is a town in the town, but it does not only consists of huts of corrugated iron. Here, you have small quarters where recidences were build, too. Afterwards, we roughly learned in the Apardheid museum what the seperation of races was about in the old South Africa and how the Non-Whites had to suffer under that pressure. 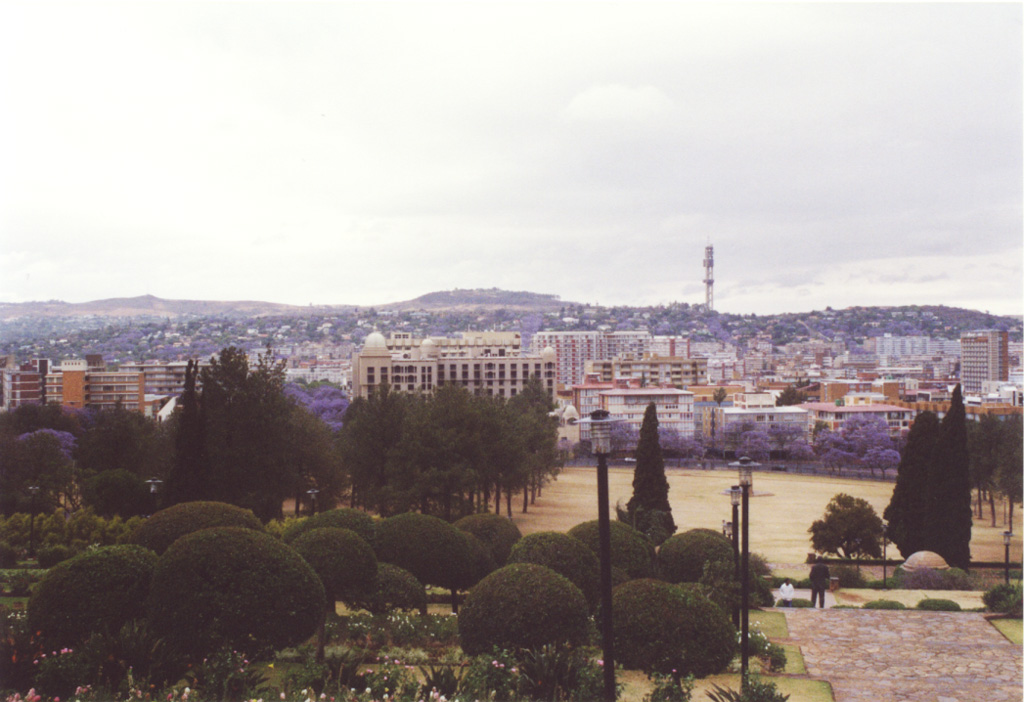 After regenerating from the hard flight and first day, we moved to Pretoria, the capital city of South Africa. Arrived there, one could not have overseen that currently (we had October) was spring: All the trees were blossoming. And as there were so much Jakaranda trees, the whole city was violet coloured. But not ony the trees showed that it was spring, also the temperatures and the complete weather were spring-like. We never thought about meeting such a wet and cold weather here.

The weather kept bad: Deep and dark clouds and rain did not help to bring us in the mood for holiday. THAT is Africa? On the next day, a tour that should the beauty of the landscape was planned. But with that weather, we could forget that. Happily, we could shuffle the plan a bit, moving on to the Kruger National Park first. Even that area shows different than a naive European would have imagined it: A large and flat plain covered with brown soil and brushwood without green leaves reached the horizon. No green, no open savannah. Sure: the winter has left currently. After some hundred meters behind the park entrance, we saw our first herd of Impalas. It should not be the last one... 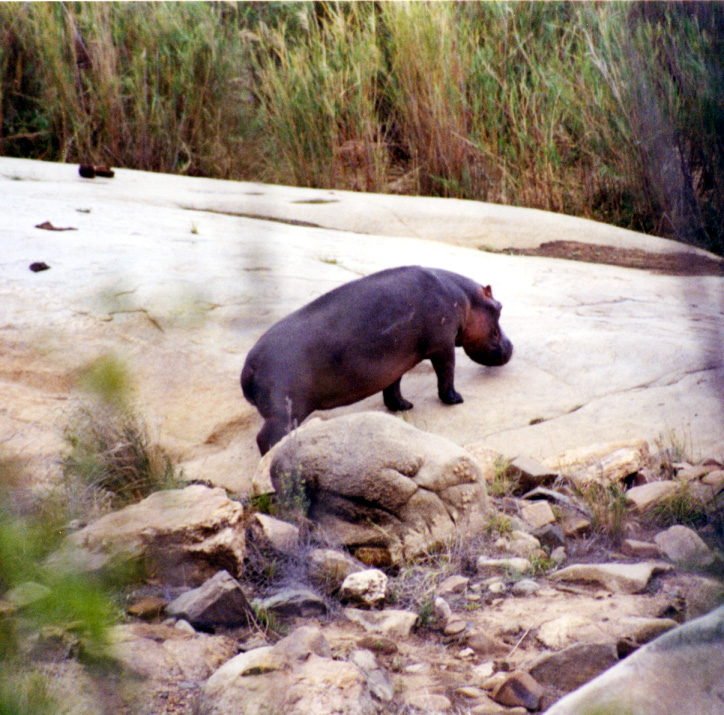 Our instict for hunting was wakened up. All stared out of the window of our bus, everyone wanted to be the first to see and identify the next animal. But it wa not easy at all to spot any animal in that landscape of gray and brown, as most of the animals we were looking for also are brown or gray. After a while, our eyes became trained for their new task and we spotted the inhabitants of the park: from zebra to giraffes, from warthog to lions. 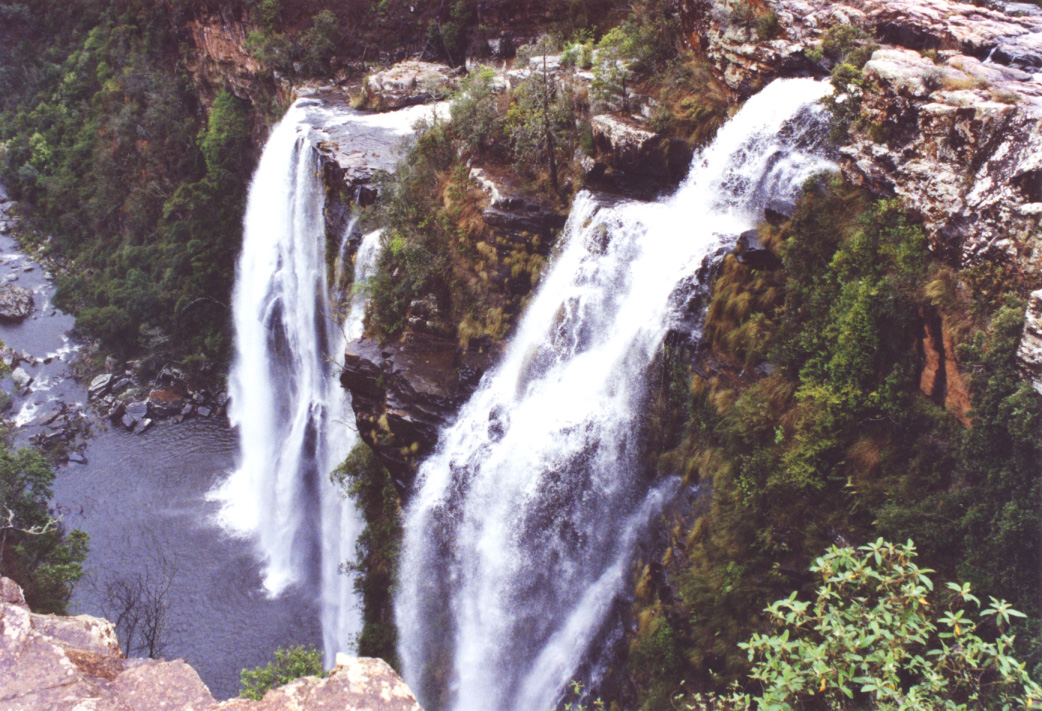 By the first impressions of the Kruger Park we were reconciled. Now, we started full of anticipation in the delayed landscape viewing tour. That day, too, started with deep clouds which did not allow us to see more that some meters outside of the window of the bus. We tried hard not to loose our newly gotten mood. After a while, we were rewarded: Step by step, the weather became better and we could enjoy an incredible view of a landscape mady by water: Burkes Luck Potholes and the "Berlin-Falls". 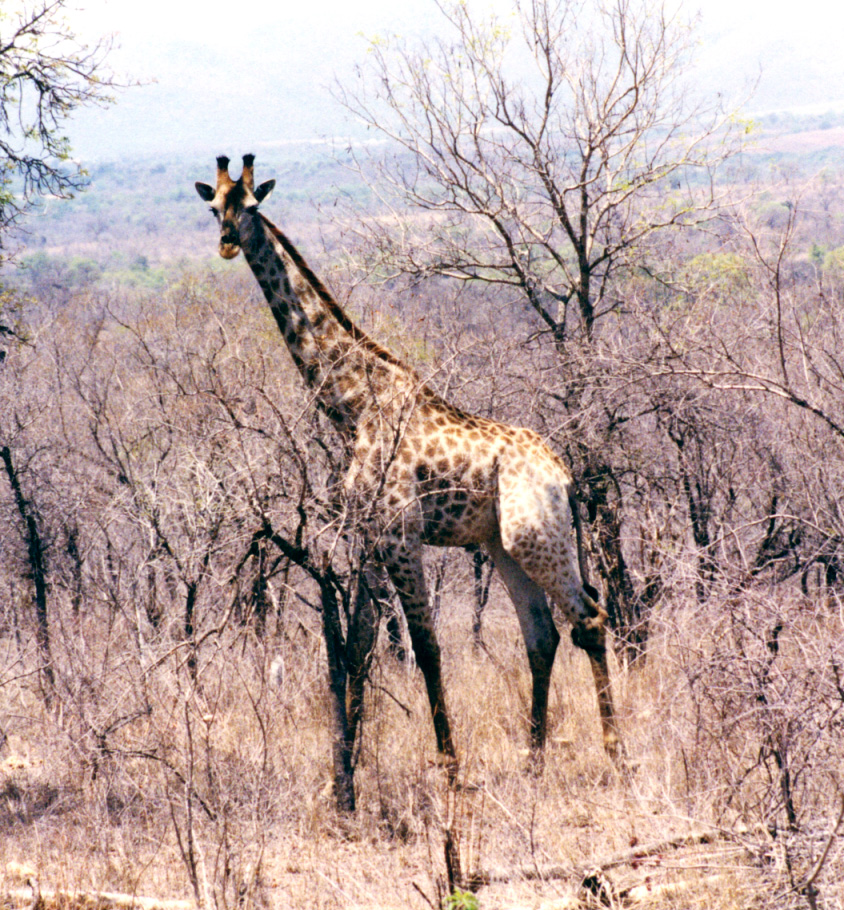 The next two nights we would stay in a lodge immediately at the border of the Kruger National Park, our travel description told us. And so it was: In Malelane, a fabulous resort was waiting for us. The park was just on the other side of the river which builds a natural border. On the way to our hut where we stayed here, a kudu was standing right beside our way welcoming us. The short evening we stayed under the sky, with a direct view over to the park, observing hippos, giraffes and elephants at and in the river. We agreed: If there is a paradise somewhere on earth, it is HERE. 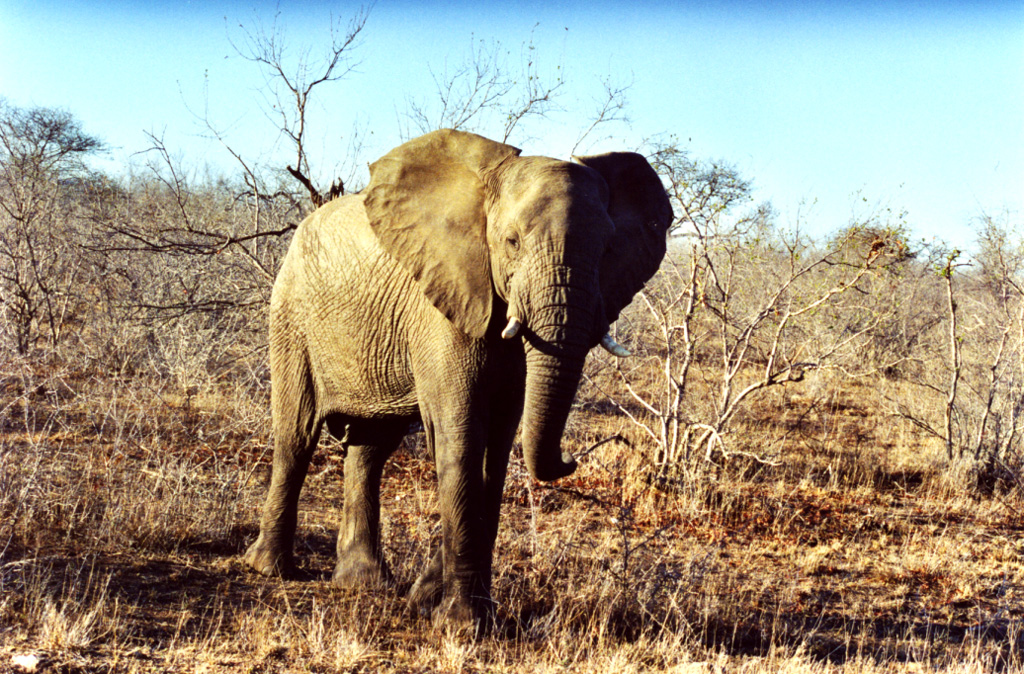 On the next day, we started early: At 6 o'clock we started with small jeeps to the second part of our safari, today a bit more individual. The air was silent and icy the airstream. But the things we saw in the dawn, compensated for all that: No 10 meters away from our jeep a small herd of elephants was breakfesting. The silence was only disrupted by the clicking sounds of our cameras and the crushing of the wood of the young trees which the elephants were breakfesting.

With the rising of the sun, the temperatures jumped up and the sky was depp blue for the first time we were in South Africa. So, we had the best conditions to "hunt" again the wild beauty of the flora and fauna. But, sadly, we also knew that this would be the last day here. Tomorrow, we would flew to the southern coast. 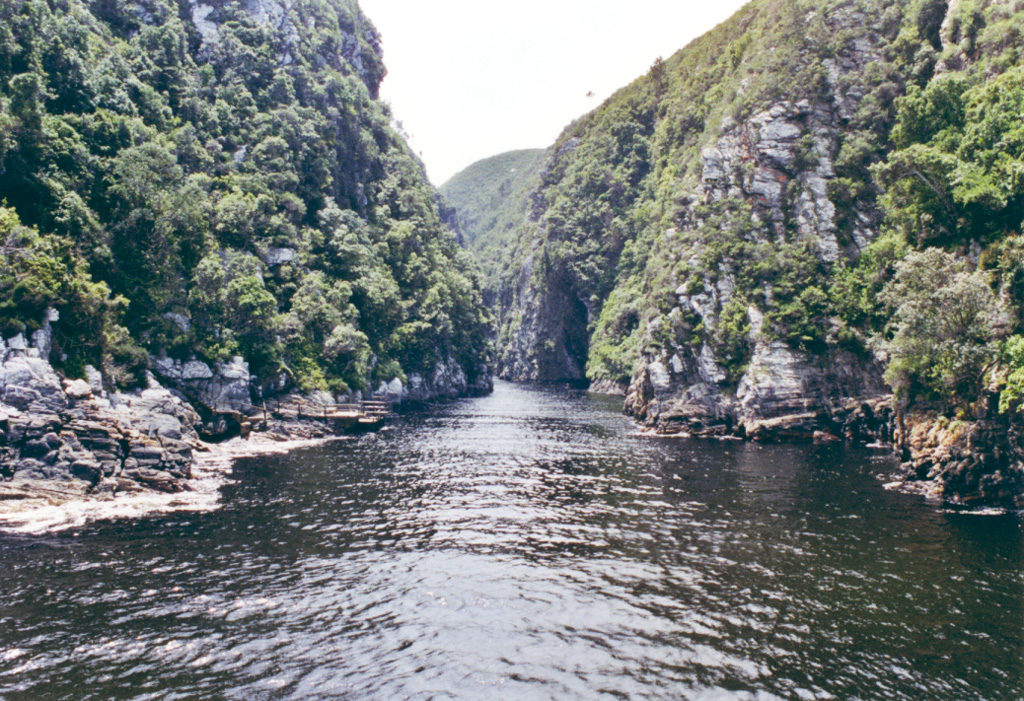 Arrived at the sout coast, it continued not less interesting and exciting: Beside a (far too) short visit in the coastal rain forest of the Tsitsikamma National Park we could spot here our first dolphin in the wild.

It should be only the forerunner of its larger brothers and sisters: In Hermanus we had luck to see whales which just moved by. Moreover, we visited another for South Africa famous szenario: Ostrich farms. Even today when the zenith of those farms is already gone, there are lots of them. And so we learned how to ride an ostrich, that one can stand on an ostrich egg without breaking it and why the ostriches were raised today. 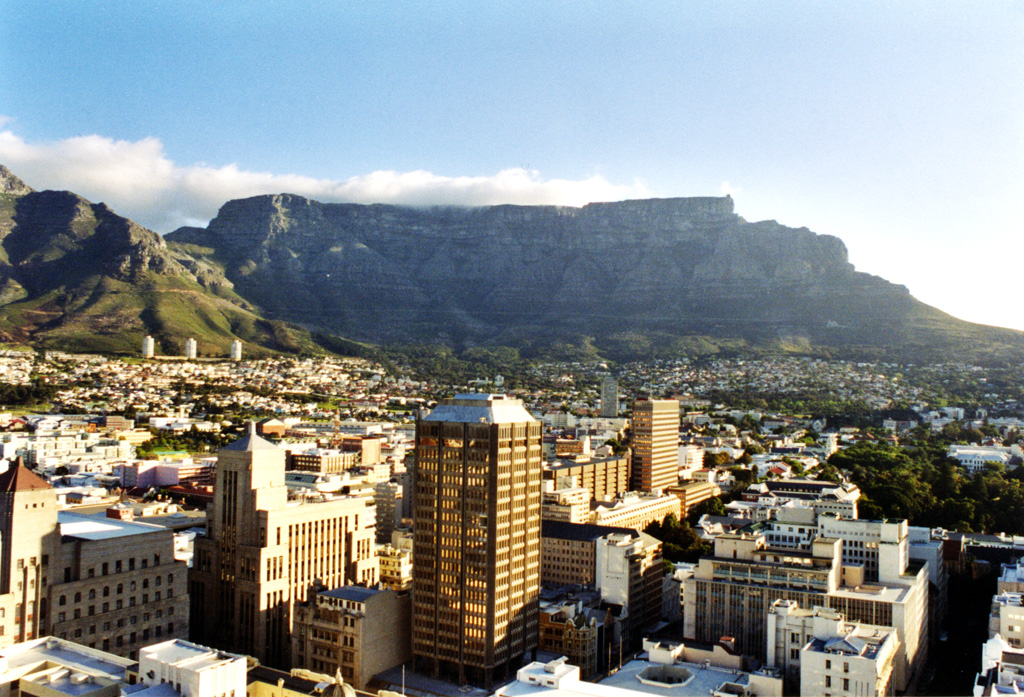 Finally, we arrived in Cape Town. Starting from here at the end of our journey we would discover the Cape area. A last time, the fortune meant well with us: Our room has a direct view to the table mountain. Through the grand scaled window we could see over half of the town and the table mountain in its full beauty (with and without its "table cloth" made of clouds).

That in South Africa beside the vine-growing estates there are also penguins, did not wonder us no more. We had experienced too much wonderful adventures in that country. Full of impressions we had to face up to one fact: Now we had to go back to the cold, foggy Germany.

We are sure about one fact: THIS was definitely not the last visit in that wonderful country. And the impressions of that country will stay in our hearts until we will come back!